When I Addressed It

GOODNESS GRACIOUS… yesterday was a hard one! I almost fainted on the train in the morning (have not been sleeping or eating well) and felt just all-around shitty! It seemed as if everything around me was moving in slow motion – people, buses, trains, conversations – while my pulse was racing. In short, I was all kinds of out-of-synch! My head seemed to not be communicating the correct commands to the rest of my body – shit was all over the fucking place! Sigh…

Have you ever had moments (or days) like that? I admit to being very scared – realizing that I had lost the control over myself to some unknown entity was quite unsettling. Coming to terms with the reality that I had zero idea what that “entity” was, was quite the mind-fuck! So, I went into instant putting things right mode; and I’m alive today (thank God) to tell you about it. Let’s address this.

Yesterday was my last class of the semester before finals next week. And, as I have realized is the way of professors, the impending end of the term does not mean winding down, it actually signifies the acceleration of things – lectures, homework, papers… stuff. It’s almost as if no one told them before the second-to-last-week that the day was coming; so they’ve now decided to pack a bunch of shit that should have taken four weeks, into two. Oh well… So, there’s that. Then, there’s work. Now, I certainly am grateful to have a job (and one that I am both good at and enjoy), especially as there are so many unemployed and struggling; truly. But I have to tell you, full-time work and full-time school is absofuckinglutely no barrel of laughs! Whew! I know… it’s my damn fault for waiting till my ass is so damn old and have many responsibilities to go to college! If I had done it when I knew nothing of either the world or myself I could have gone and had my parents pay for it (yeah, right!), while I spent much of my time fucking off. I know!!

So yes, there is a lot on my plate. And, that’s so not even the tip of the iceberg; there’s life. And, that brings me to today’s point – there IS life! Yes, yesterday started off downright shitty! For the first time I thought of indulging in that silly #throwback business – I wanted to throw Thursday back! I had had enough and it brought me to tears. But, when I recognized that it did not bring me to my knees, I realized there was hope. All was not lost; and I could/would survive the upheaval. So, I started to make plans. I took a few minutes to figure out exactly what I was feeling and what I needed (to feel better). The first thing I admitted was that I needed some rest – mental and physical.

I have found that asking for what we need is a very difficult thing for a lot of us to do. At times we believe it exposes too much of our vulnerability and most times, we assume that those around us should just know. The truth is that neither is true. It absolutely does expose our vulnerability; but, not too much. As for the latter, well, good luck with that! Expecting those around us, no matter how much they may know, care about and love us, to properly interpret and deduce what we may need without our articulation is setting them up for abject failure and ourselves for constant disappointment. Let that go.

I asked for and was granted the day off. I got scared by feeling faint and the mere thought of having to do today the commute I endure daily was too much to fathom. So, I’m home. I had a conversation with my History professor and admitted how incredibly stressed I am about his final on Monday. I asked for his help – any advice he could offer that would steer me in the right direction with regard to how to most effectively and efficiently prepare; he gave me some fantastic advice (will keep you posted on how it worked out). Then, I took the night off from my regular (aka, boring) routine and spent some time with some friends from out of town (well, from out of the country – they’re Dutchies). I gave myself permission to enjoy myself; to take a break. I had a blast (as you could see from the pic)! 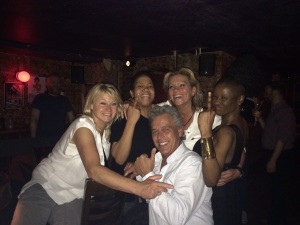 Today I am feeling a bit better; hung-over, but better J . The funny thing is that nothing has really changed – I am still tired, finals are still next week, work is (thankfully) still full-time and my commute is absolutely still kicking my ass! But today, even though my reality has not changed, my approach certainly has. Just the mere act of remembering to take care of me, to make it okay to take care of me, has allowed for some space to breathe. Asking for (and getting) what I needed was huge; both in the asking and the receiving. Taking a night off from the very weighing responsibilities of my life, to enjoy my life, was wonderful. Laughter is truly an amazing healer!

Listen, I applaud all of us who are committed to our lives – who get up every day to kick some ass and handle our business – that shit is hot as hell! But, I encourage you to not be like me – please find some balance – it is okay to stop once in a while and smell the alcohol… oops, I meant, roses; yes, smell the roses J

Take care of yourselves, please.

Posted by Let's AdDress This...

2 responses to Raise A Glass. Raise Some Hell. Or, Raise A Finger. Just Raise Something To This Life…